Hector Tejada and his Conuco Farm 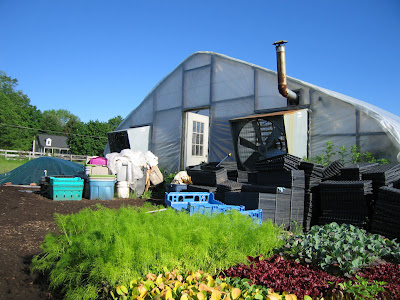 About ten years ago, Hector Tejada, the farmer who sells his Conuco Farm produce at the Fort Greene farmer's market each weekend, decided to start a career of farming on rented land. It was a new life, not just on the farm; Hector immigrated to the United States from the Dominican Republic only a few years earlier. He had previously survived by working jobs for different vendors at the year-round Union Square farmer's market, jobs to pay his bills.

"I was more interested in music, becoming a musician. Or screen-printing." Hector explains his New York City life pre-farming. He went to school in the D.R. for graphic design.

Eventually, Hector followed one of his employers back to a farm in Pennsylvania, for full-time work in the field, returning to Manhattan for Union Square's market each week to sell produce and manage the stand.

"At the end of the first summer, I took my money and bought a lot of silk-screening equipment." says Tejada, who still had not seen himself as a farmer.

However, soon the tug of the land pulled him into what became a life's passion in farming for himself. Hector's Conuco Farm  has been his livelihood in six different locations local to New York City during the past decade of selling his produce at the GrowNYC Greenmarkets. A year in the Fingerlakes region, another renting a couple acres from the farmer back in Pennsylvania, two years in Nazareth, Pennsylvania, then back to New York near Hampton for another year, followed by two more properties, both in New Paltz, N.Y. where Conuco Farm currently resides. Along with that, a group of Brooklyn food folk helped him start his own CSA, Bed-Stuy Farm Share, which is now in its' sixth year. At one point he was doing a mind-boggling seven GrowNYC markets a week, which turned out to not be worth the time, money and utter-exhaustion.

"I would do Union Square Friday, Fort Greene Saturday, Tompkins Square Sunday, Union Square again on Monday and Wednesday along with the 96th St. and the Columbia University markets on Thursdays. That was when I did baked goods, too, so some markets would just be that." recalls Hector.

"I had about six or seven people working for me, some just did markets, some the CSA delivery, a few people in the field. Sometimes I wouldn't even drive back home, just sleep in my truck outside a Trader Joe's or where-ever off the expressway in New Jersey, wash-up in the bathroom, get some food and sleep for a few hours. I was making a lot of money farming and I was also spending a lot of money farming, paying people, rent, repairing equipment, tractors, gas....the more I farmed the more money I spent and I am lucky to break even."

Cultivating land that is not his own is a challenge in the long term. Landlords' unforseen demands, fields near rivers prone to flooding and the hesitation to invest time and money building up good soil with lingering uncertainty of being able to stay long-term has made renting farms a frustrating endeavor. In one case, a disgruntled property owner forced him to leave before the season was over.

"I still had to harvest for my CSA and she wouldn't let me back in the field!." Laments Hector, who claims she had issues with his hiring of worker's without legal papers. "I became both farmless and homeless" he says, describing his search for another place to start again.

Eventually, through a fellow farmer friend, he found New Paltz N.Y. and soon narrowed his business down to the CSA and one market, Fort Greene.

"I first started selling at Fort Greene in 2003." says Hector. "It was a new market and I was one of the first farmers put there by GrowNYC. It was great. A lot of diversity, people recently graduated from school, new families with babies, neighborhood people living there for 40 years. A lot of people in the summer."

When asked of any changes he's noticed throughout the past several years of being there, Hector recalls the beginning being better for business.

"For me, that market was better in the beginning. New and fresh, blowing your mind. But people move on and it lacks promotion in the neighborhood." Tejada is referring to the temporary managers hired to run the year-round market for only short periods, usually the summer season. He stresses that the market needs someone permanent and from Fort Greene to manage it's potential in flourishing with the surrounding community. "A Fort Greener!" Hector laughs.

When questioned if he would like to continue selling at the year-round Saturday market, Hector reveals a bit of why he does it.

"I love that market. That markets' been one of my columns that allow me to exist. It supports me. Last year I had to choose one market and I chose Fort Greene, and I know why: When I was homeless and farmless I would park my van in the same spot by that park and sleep where my market is."

"When I walk around the neighborhood people recognize me as part of the market and smile and it feels nice. I don't live in Fort Greene, but when I'm there I feel it's my home."

Note: Hector decided in early August that he would not continue leasing the land he is currently farming next season due to it being prone to flooding by the nearby Wallkill River. As of late August, Hurricane Irene has left the field, greenhouse and all access roads completely underwater.

Ray Ray Mitrano has been involved with GrowNYC Greenmarkets the while living in Brooklyn the past few years. This past spring, he moved to New Paltz, N.Y. for full-time work at Conuco Farm, in the field and back at the markets.
at 10:01 AM