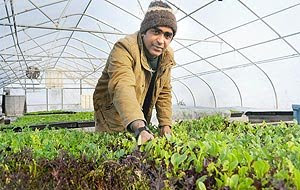 For decades, the relationship between growers in the Hudson Valley and consumers in New York City has been best exemplified by the New York City Greenmarket, a series of outdoor markets where local farmers and artisans can bring their wares to an urban population weary of paying top dollar for bottom end grocery store fare. In recent years, the growth of the CSA has added a new dimension to the relationship, with one being strengthened this year by adversity. Read more: New Paltz Times - Working Relationship: A series of benefits for Conuco Farm were recently held in Brooklyn
at 9:49 AM