Looking for a Farm 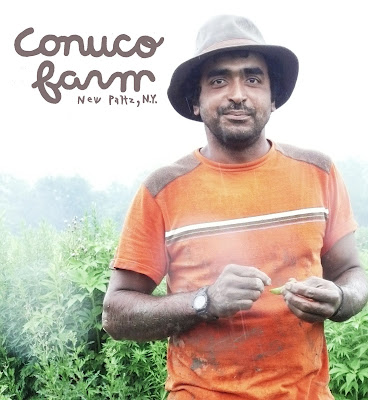 The life of a farmer who does not own land requires a willingness to accept displacement from season to season. Conuco Farm has grown crops in six different locations over the past decade.

Hector Tejada, the farmer behind Conuco, has experienced major setbacks to his ultimate goal of owning and farming his own land in the wake of Hurricane Irene and Tropical Storm Lee.

In the aftermath of the storms, Mr. Tejada’s 11 acres of leased farmland in New Paltz, N.Y. was flooded for days. The water killed all the plants and spoiled a great deal of autumn produce. The sudden loss of his crops ended Mr. Tejada’s farming season, and left him, along with his three workers, jobless.

“It looks like a dead piece of ground,” said Mr. Tejada. “Full of dead stuff. Dead worms. The whole place stinks and it’s not the best soil after water has been there for so long.”

Mr. Tejada has had to work at an orchard and for a nearby organic farmer, who is still able to harvest for the market, in order to pay his bills.

“Five days a week I work for Glory Orchards, picking fruit, pruning grape leaves, packaging, filling boxes for wholesale,” said Mr. Tejada. “They have about 40-something acres of fruit, mostly apples and pears right now. Then for two days a week I work markets for Taliaferro Farms, one in Ossining and another in Nyack, loading the truck, setting-up and helping sell and manage the stands.”

He lives in an apartment in Rosendale about six miles down the road from what was Conuco Farm. He returns to the farm when he can to begin the slow process of cleaning up the field and the greenhouse. The Conuco Farm stand, a regular at the Fort Greene Park Greene Market, Bed-Stuy Farm Share CSA and Union Square Greenmarket, has been absent for weeks following the storms. Members of his CSA recently made trips upstate to help with the cleanup, and other regular market customers have also offered their help.

Even though the clean-up phase has begun, Mr. Tejada said he is uncertain about next season.

“I’m trying to be the best that I can be. Remaining positive,” said Mr. Tejada. “First, I need to clean and start moving. I’m looking at my options.”

Anyone interested in helping with clean-up can contact the Bed-Stuy Farm Share at bedstuycsa@gmail.com or contact Mr. Tejada at conucofarm@gmail.com to discuss clean-up or to help with his search for a permanent plot of land for the farm.